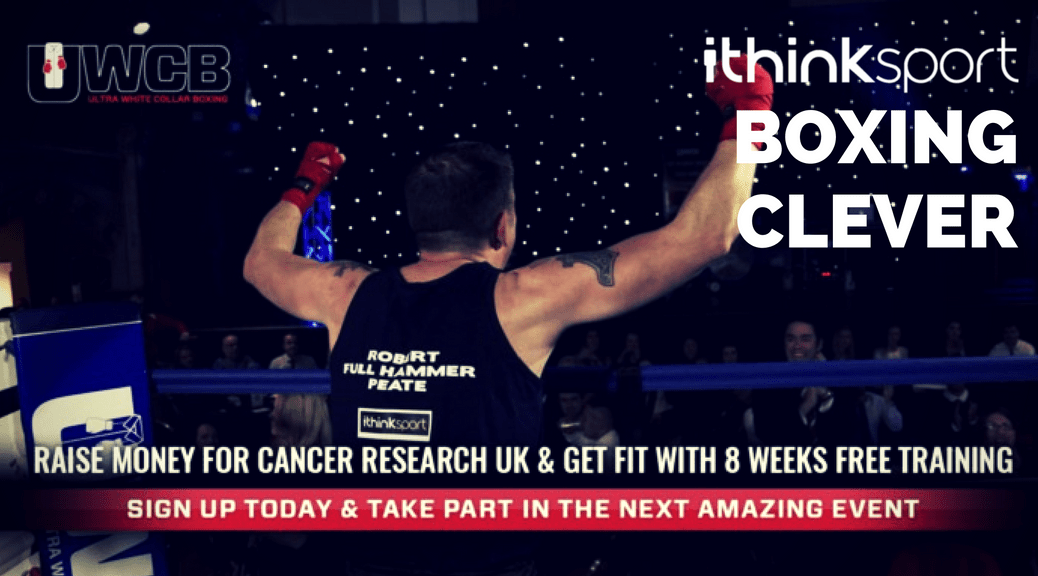 The popularity of Charity Challenges are on the rise, and the range of different sporting activities on offer are vast. From scrambling up, over and through muddy obstacle courses, to hiking a set of mountains in the space of 24 hours, whatever your interests and ability, there’s something for you.

But how do you go from your everyday sporting interests to something that will push you to your physical and mental limits? We proudly sponsored Robert Peate in his recent Ultra White Collar Boxing challenge and asked him to tell us how he got on.

What made you decide to get involved in this Boxing challenge?

Initially, this was very much about me and my next challenge; I first saw these events via a link on social media 4 years ago after I’d just completed Tough Guy, (which is sort of the granddaddy of all obstacle races), and it ticked the right boxes. Personally speaking I like a challenge which is out the ordinary and that not many people take on…I like to be different and do something unique. Personal circumstances took over and although I was following the links on social media, the idea got ‘parked’. Fast forward 4 years and I was in need of something to kick me out of a rut; I was out the habit of training, putting on weight and was feeling a bit ‘stagnant’; very much stuck in the eat, sleep, work, repeat cycle.

What gave me the final kick up the bum but completely changed the emphasis of why I was doing this actually came after I’d signed up. Tragically, a girl who was in the same class as my 10 year old son passed away from a rare form of cancer earlier this year and to be honest it knocked me sideways. I only knew her in passing but having seen her from the age of 4 dealing with chemotherapy, all sorts of drug trials and treatments, it felt very personal when she passed away. Although I’d already signed up to take part, the training hadn’t started but it changed the emphasis completely away from me to something much bigger than me; UWCB are Cancer Research’s biggest corporate sponsor and it seemed like a fitting tribute to do my bit in her memory.

In terms of my starting point, my Dad had taught me and my brothers some of the very basics of boxing when we were kids but that was 30 years ago. He’d done some schoolboy stuff himself back when boxing was still on the school curriculum and wanted us to be able to throw a punch properly, more to be able to deal with the school bully rather than anything else I think but I at least knew how to hit a punch bag. As I said earlier, my starting level of fitness wasn’t great. As a full time desk jockey, making excuses not to work out was easy, ‘it’s too dark / too late / it’s raining / I’ve got things to do’ were all too common but I’m very much the sort that when I commit to doing something, I do it so having a new focus really helped motivate me. To give myself at least a small head start I’d starting circuit training and doing general gym work from about 4 weeks before the 8 week training programme started. I knew the fight was going to be short, sharp bursts of action so for us at least, long distance endurance wasn’t going to be as relevant. I’m glad I did give myself a start because the doms at first were a killer, I was ashamed just how far out of shape I was!

How did your training begin to prepare you for the challenges of a real boxing match?

The first time I walked into the gym was quite an eye opener. The guys taking the training were all ex-pros or current amateurs and they’re in a whole different league. The first things that hits you is the noise; there’s music blaring, the sound of gloves smacking into pads or bags but the one that struck me was the whirr of a skipping rope…skipping like that is still a black art to me but hugely impressive, anyone that scoffs that skipping is just for girls needs to walk into a boxing gym.

At first the training was quite ‘gentle’, focusing on your stance, how to move, throwing a punch properly and more importantly how to block punches and protect yourself. The first 2 weeks was all pads and bags work, throwing various combinations of punches for 2 minutes at a time to replicate the rounds we’d be boxing. If you think you’re fit, try hitting a punch bag as hard and fast as you can for 2 minutes…I guarantee that for the first 30 seconds you’ll be flying, after a minute you’ll be slowing down a bit and by 90 seconds you’ll look like one of the Thunderbirds with the strings cut! It wasn’t until the third week we got to step into a ring. Weirdly, through the whole process, I wasn’t ever intimidated by being in the gym or sparring. I think it was the fact that it was always a controlled environment, there’s no wild brawls and the trainers are always working closely with you to help you along and assess your abilities, the atmosphere was never aggressive. Again, the sparring at first was very controlled and measured, you’d spend a round just throwing a jab or blocking punches and it wasn’t until week 5 that the gloves were off so to speak.

The first time you get caught by a big shot is a real shock, body shots particularly really take the wind out your sails. It wasn’t the first time I’d ever been hit, I’d been in enough scraps as a kid growing up to know what it felt like but this was different again, more measured almost. During one of the sparring sessions, the head trainer Ben took me to one side and said “you’re throwing lots of good scoring punches around the body but you need to starting hitting people in the face”, it’s not often people will say that in any environment! You do have to learn quickly that if you don’t punch out first, for sure the other bloke will take a swing at you. It’s not so much a matter of being aggressive – the one thing you’re told time and again is not to lose control – more one of taking control of the fight and trying to dominate the other guy.

I found that as the training progressed my confidence grew quite quickly but I don’t think that was anything to do with technical ability, what I did do was listen carefully and take on board what I was being told. The trainers told me that my footwork was good, (it might sound weird but a good punch starts with your feet), and that the combinations I was using were good too so I took a lot from that. What at first took a bit of thinking about quite quickly became automatic, everything from knowing how to put my hand wraps on to how to move properly to knowing when to look to offload a big punch. By week 5 my fitness had improved radically. I was training up to 6 days a week now and with cleaning my diet up I’d lost about half a stone of fat but toned and bulked up around my upper torso and trunk, I was feeling good, fit and strong and that helped with my confidence no end.

Was there a shift during training from a focus on the physical to an awareness of the psychological demands of the upcoming match?

There wasn’t a specific change of training, (the trainers were all concerned with making sure we could defend ourselves properly and that the bouts were evenly matched), but for me at least there was a subtle shift in the atmosphere around the gym. The first couple of weeks was all about learning the basics and getting a feel for things but as time went on – and particularly as the sparring became more intensive – everyone was trying to work out who’d be fighting whom. As background, we didn’t find out who we’d actually be fighting until 48 hours before the bout, there were ‘face off’ photos done as part of the publicity process. We’d all been allocated weight divisions and had been training and sparring with the same 6 to 8 guys for most of the 8 weeks so we were all trying to second guess who we’d be facing.

For me, there were only 2 guys I was worried about facing, Mark, (who I wound up boxing!), because he was a Southpaw rather than Orthodox stance, (for those unfamiliar with boxing parlance, that basically mean he leads with this right hand, rather than his left which makes him awkward to fight), and a guy called Kev because frankly he’d hit me really hard in training…genuinely I was seeing stars for a second! I kept telling myself that everyone in the gym was probably having the same thoughts and that all I could was train as hard as I could and deal with whatever was in front of me on the night, the rest was out of my control so there was no sense in worrying about it.

What was harder for me was learning to switch off. I had no problem ‘getting in the zone’ during training but switching off was a problem. Training didn’t finish until 9pm so it was around 9:15pm by the time I got home so I’d basically square my kit away, have a quick drink to rehydrate, have a shower and hit the sack. The problem I found was that as soon as my head hit the pillow, *ping* my mind was racing around my technique, the combinations I wanted to get in during the fight, who I’d be facing, and basically everything about the fight. It was making getting off to sleep really hard, (and the rest periods were crucial for me), because my brain didn’t slow down for hours. After some brilliant advice from you, I learned to focus on my breathing, literally counting each breath in and out, and that gave my brain something else to think about whilst my body relaxed.

It’s great to have this personal insight into how Rob got on with his training programme and details of how he got on in the fight will be in his next blog post!

In the meantime, it’s great to hear how Rob was motivated to start this new challenge and how meaningful the whole process was for him. Confidence grew through his positive experiences in training and improving his technique and fitness levels. Although he was worried about his opponent, he quickly realised that this was something outside of his control so focussed on other things. Finally, the ability to switch off and rest became really important; using relaxation techniques helped him to get adequate physical and mental rest.

Interested in improving your sport confidence? Check out our online course and use code ‘boxingclever’ to get 50% off.